The right oil will protect your machine from friction, corrosion and wear, assist cooling, keep moving parts clean and functioning properly and aid proper sealing. The right oil will do all this – and minimize viscous drag that reduces efficiency in both automobiles as well as stationary machines.

Back in 1976, when OIP took out the first batch of the then world-class lube oils, the range was narrow. The additives were few and far between. The meticulous spectrum of today’s additives was yet to be born.

Three decades of relentless research and innovation and development, and a sharp eye on the developments taking place in the world of science and technology have brought OIP where it is offering a complete range of premium lubricating oils for most of the major applications. No matter where a part is moving – be it the diminutive spindle whirling crazily around itself or the crankcase of a fleet engine – OIP has the right oil for it. 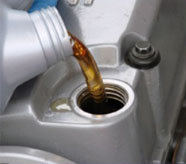 THE ART AND CRAFT OF LUBRICATION

It would be a safe bet that the art of lubrication was born on the afternoon of the day the wheel was invented.

A carving on the Egyptian tomb of Ra Em Ka (2600 – 1700 BC) shows a man pouring liquid to oil the rollers over which a huge load – perhaps one of the mammoth bricks with which pyramids are built – is being hauled by scores of men pulling the ropes tied to the load.

Traces of animal fats have been found on the axle of a chariot dated 1400 BC.

‘Betton British oil’ was the first mineral oil to be sold in Britain. This massage oil was distilled from shell oil and sold as remedy rheumatism – in the hope, perhaps, of ‘lubricating’ the knee joints!

These were the days when any odd oil would do to lubricate any surface moving against another. Not anymore. The advent of the Industrial Revolution brought in speeds such as those never known to man before. These speedy machines were soon found to be quite fussy over the oil that was fed to them. The quest for the ‘right oil’ began in the earnest then, and is continuing to this day.